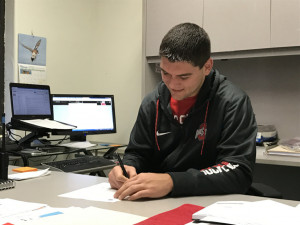 Not everyone who signed with Ohio State last week did so surrounded by hundreds of classmates or on national television. Some, like Mantua Crestwood two-way lineman Aaron Cox, simply signed their letter of intent on their coach’s desk.

The 6-foot-4, 230-pound Cox turned down overtures from Akron, Cornell, Harvard, Princeton, Toledo and Youngstown State to live out his dream as a walk-on at Ohio State.

“Just the opportunity to work with the best players and coaches in the country, Ohio State is where I felt I’d reach my best athletic potential,” Cox told Eleven Warriors. “I liked their Real Life Wednesday program, which no one else does. Plus, growing up in Ohio, I’ve always been a huge Ohio State fan.”

Cox recorded 67 tackles and 13 sacks to help the Red Devils to a 9-2 record and the regional quarterfinals as a senior.

“[I’m going to] work as hard as I can every day on the field and in the classroom, graduate with a degree and hopefully be able to earn a scholarship in a few years,” Cox said.

No Events This Week

Events are added by athletic staff.
View All Events