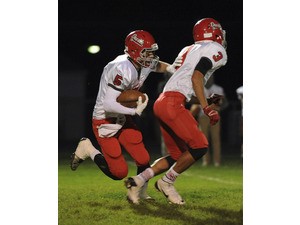 Then, Woodridge switched over to the Metro Division, and newcomer Crestwood was supposed to challenge Mogadore for County Division supremacy.

Not Friday night, when Mogadore dominated every phase of the game en route to a 42-7 victory over visiting Crestwood.

Already ranked second in Division VII, Region 23 entering the night, the Wildcats put forth a powerful statement against the Red Devils.

“I was extremely proud,” Mogadore coach Matt Adorni said. “I was not expecting that, I’ll be honest.”

The Wildcats (5-1, 1-0 County Division) averaged 4.44 yards per carry. Nothing stunning, but they kept moving forward. Thirty-seven of Mogadore’s 52 carries were for three-plus yards — or a touchdown.

The Wildcats forced five turnovers — four interceptions and a fumble.

The Red Devils (4-2, 0-1) didn’t manage a first down until the final minute of the first half.

“Dubs is a football player,” Adorni said. “He’s a throwback, caveman, hard-hat kind of kid. He doesn’t look the prettiest. We call it the waddle, but he brings it.”

The junior was quick to credit his offensive line.

“Every touchdown I had was right up (the middle) ,” Williams said.

“It truly was a team win,” Adorni said. “One guy might have scored five touchdowns, but that was a team victory.”

Mogadore wasn’t particularly explosive running the ball. Of the Wildcats’ 52 carries, only four went for double-digit yardage. The Wildcats’ longest run of the day was for 18 yards.

But what Mogadore lacked in explosiveness, it had in steadiness.

Over and over, the Wildcats steamrolled downfield with a dizzying array of runs. Left off-tackle run, quick pitch to the right end, inside handoff then a fake to the outside pitch and another handoff inside.

All in spite of center Nick Gooden’s absence. Out with a knee injury, Gooden was replaced by senior right tackle Nate Confere, while junior Andrew Popa “stepped up big,” Adorni said, in Confere’s place.

“We never dreamed we were going to be able to move the football that consistently,” Adorni said. “We did it in chunks sometimes. We weren’t getting big, long runs, but we were patient.”

Indeed, the term used after the game was a “weight-room victory.”

“It’s what we are,” Williams said. “We hit the weight room, we attack it hard, no matter what. If it’s early in the morning or late at night, we’re doing it as hard as we can.”

Interestingly, most of Mogadore’s pitches were taken a yard or two behind the line of scrimmage, instead of the more customary four or five yards back.

Meanwhile, Crestwood was powerless to respond.

Turnovers were one problem.

On the Red Devils’ first play from scrimmage, they fumbled, giving the Wildcats the ball six yards from paydirt. On third-and-goal from the 2, Williams was able to punch in an inside handoff.

Given the ball back, Crestwood went three-and-out as Mogadore beautifully read an outside pitch and an inside screen.

On the Red Devils’ second possession, junior quarterback Jordan Fabry, in his return from an ankle injury, threw his first of four picks, a diving number by senior Luke Cramer.

After the Red Devils were set back by an illegal procedure call, creating first-and-15, Fabry was clocked. On second-and-14, he sailed a pass to Anthony Bates. On third-and-14, Fabry found Dylan Hart for what appeared to be a first down on the left sideline, but the senior tried to cut in and ended up falling a yard short of the marker. On fourth-and-one, senior running back A.J. Foulkes was stonewalled.

Back it went to Mogadore, which ran six straight times for a 21-0 lead. The Wildcats eventually took a 35-0 cushion into the locker room.

Not even the halftime whistle could stop the Wildcats’ relentless attack. They began the third quarter with a 76-yard drive, recording all six of their first downs on the ground. Both Williams and senior running back Nate Alexander were able to fight through tackles and push through for extra yardage.

The drive ended up taking 11:24 and Mogadore led 42-0. The game was over. The challenge was fended off — at least for one night.